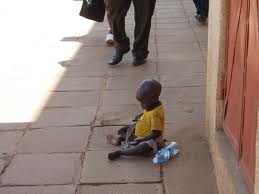 According to the Street Child Project, 10,000 children in Uganda live on the streets. The causes of this vary from abuse, neglect, poverty, displacement, war, peer pressure and orphan-hood. There is much contention in Kampala, the capital city of Uganda and from my observation the hub of the ‘street children’ (UNICEF defines a ‘street child’ in three categories: “street-living children,” “street-working children,” and “street-family children.”) about how best to help the children- giving them handouts on the street? donating money to charity organisations that are able to give more long term solutions to the children? ignoring the children until they get tired of begging (‘working’) and leave the streets? arresting the ‘business men’ who traffic some of the children onto the streets?…I have my own opinion(s) on all this which I may share in another post.

This is a poem I wrote while at university inspired by a girl who looked not older than two, who was begging on Namirembe road, a busy road in Kampala town.

Her outstretched hand was almost unseen
She was so small, so unnoticed
It’s a wonder she was never stepped on
She sat like a little shadow
In the middle of the afternoon hustle
Her sisters would harangue each passerby
Leaving her on that hot concrete
To beg some more
And yawn some more

Once in a while someone would be kind
And drop a silver coin
In the outstretched hand
Before she could blink
The coin would be out and into the hands of one of her siblings
She would start to doze
Her tired hand would start to drop
A rough shove would quickly jolt her
No sleeping on the job!

Is there hope for little Unseen?
Will everyday of her life be like this?
It has been two long years
Two very long years but her life hasn’t even begun.

Hi I'm Roxie. I'm an encourager and writer. I enjoy helping people realise and live out their potential. I like smileys and love-hearts. Thanks for stopping by. :-) <3